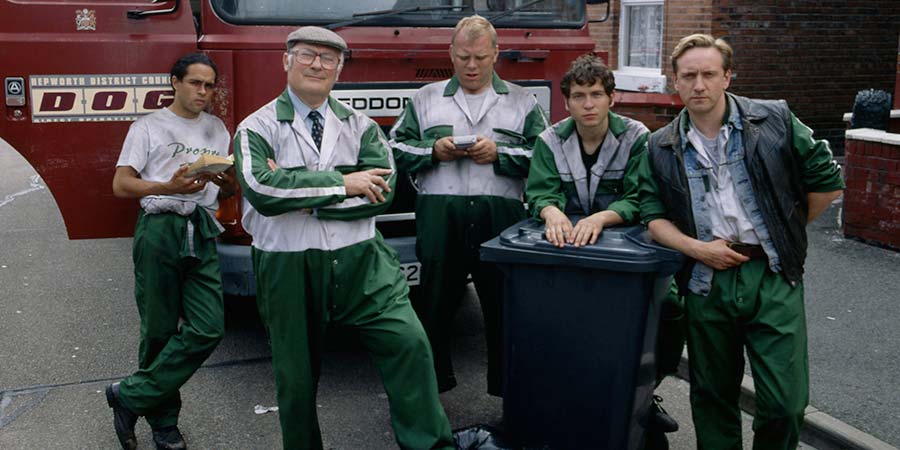 Common sense and Equity unemployment statistics prove acting is a madly competitive business. Yet the way actors tell it, this same profession breeds nothing but solidarity, tolerance and mutual admiration among its members. Only occasionally does someone break rank.

In a letter to the London magazine Time Out last October, replying to comments made in an interview by Helena Bonham Carter, the actress Kathy Burke wrote: ‘As a lifelong member of the non-pretty working classes, I would like to say to Helena Bonham Carter (wholly pledged member of the very pretty upper-middle classes): shut up you stupid c-.’ But The Observer has enough scruples about printing the f-word, let alone the c-word.

‘Oh Geeyord, I knew you would bring that up,’ says Burke when I meet her in her two-up, two-down in Islington, and she scampers off to put on the soup she is cooking me for lunch. ‘Look, it was sisterly advice. That was all it was. If I had wanted to be vicious, I could have been very vicious.’ Bonham Carter’s reply the next week was that she never imagined that life was easier if you were working-class and not pretty: ‘The unfortunate quote was an ironic, throwaway, tail-end remark.’ ‘Yeah,’ says Burke, ‘but she admitted she said it. . . What got to me was that she does all right. I think she has the power and the money to do her own projects. So I don’t really see what the problem is. She could easily employ somebody to write her a piece, employ somebody else to direct her in it and she would be happy and would employ a lot of people. She is in quite a good position. She is good at what she does, there is no denying that. It is not like I think she is crap. And she should make it happen because it sounds like she is terribly unhappy always doing the same roles. And she is quite right: it is a very blinkered profession. People box you off and only see you one way.’ So that is why Burke never gets to play romantic lead in EM Forster movies? ‘But I would never want to and also I am quite happy to represent my class, whatever my class is now. I have never really had a problem with it.’

Burke’s class loyalty or typecasting cannot be doubted, yet at only 32 she has also demonstrated range as an actress since her debut in Mai Zetterling’s movie Scrubbers in 1982: from her cabaret act as darts fan Tina Bishop to a semi-feral, naked peasant in Mr Wroe’s Virgins on television. On stage, she has been in Mike Leigh’s It’s A Great Big Shame at Stratford East (‘Amazing’ M Coveney, The Observer), in a touring production of Moliere’s The Hypochondriac (‘Bollocks, a terrible, terrible production’ K. Burke) and in Amongst the Barbarians at Hampstead, later recreating her role as a drug trafficker’s dysfunctional sister for television. And, of course, she is Magna, Patsy’s boss in Absolutely Fabulous. She has directed Jonathan Harvey’s Boom-Bang-a-Bang at the Bush and written a play of her own, a black comedy called Mr Thomas, at the Old Red Lion.

She is probably best known as Harry Enfield’s female ‘chum’ on TV, where her versatility can be examined in microcosm. Watching the Chums’ latest video the new series starts on Tuesday I spotted her, of course, as the disturbed male adolescent Perry and as the nightmare prole Waynetta Slob, and just about recognised her as Lulu, Enfield’s put-upon little sister in the nursery sketches, but I was sure someone else was playing the Brummie Mrs Considerably-Richer-than- Youse. If she doesn’t get her own series soon, the BBC is nuttier than we think.

This week also brings the return of Common as Muck (Wednesday), a drama serial which has gone from being mistaken for Carry On Up the Bins to getting compared with Boys from the Black Stuff. Burke loves the show and praises binman-turned-writer William Ivory for presenting the working-class life without a hint of political correctness. ‘Fuck that,’ she says. ‘I think that’s a waste of time. Show people for what they are.’ She plays Sharon, who this series starts her own hairdressing practice with one of the ex-binmen. Last season, her part was smaller but still memorable, especially if you saw the knee trembler when she hijacked Neil Dudgeon’s Ken mid-bin-round. The sex was about the roughest TV offers. But, as Burke says: ‘If they want rough, then I get the phone call.’

It was watching Ken Loach’s Kes as a child that made her think acting was something she might aspire to. At 16, on a teacher’s insistence, she joined the Anna Scher Theatre School in Islington. She was cast as the char, the Irene Handle rip-offs, ‘the bun lady in Brief Encounter, never the lady with something stuck in her eye’. I ask if she ever wanted to play leading lady. ‘No, I think I would find it very embarrassing being the love interest. I am this time in Common as Muck but that takes some time. Sharon is trying to better herself and change herself in this series.’ Does she ever worry about her portrayals of working-class women, eg Mrs Slob? ‘Not really, because I know people like that really exist. I think people like that will look at Waynetta and think, ‘At least I am not as bad as that’.’

Burke has licence to say this kind of thing, since she would have had every excuse if she had become a Waynetta herself. Her father was a frequently unemployed builder with a drink problem. Her mother died from stomach cancer when she was two. Burke was first fostered, then looked after by her elder brothers at home. The male environment there was so much porn in the house that at six she announced her ambition to be a stripper was poor preparation for convent school and she failed there socially and academically. When her father was diagnosed with terminal cancer two years ago, Burke reflected with him on her start in life.

‘We had good chats before he went,’ Burke says. ‘I think he was terribly worried he had not been a good father. And he wasn’t; he weren’t that great a dad when we were kids, but when he got older and gave everything up he was quite a sweet bloke. I am not being disrespectful. I am being honest.’ He wanted her forgiveness? ‘Oh God, I forgave him anyway. That wasn’t even a question. I am happy with who I am and that wouldn’t have happened otherwise.’ Was he a good critic of her work? ‘He thought a lot of what I did was shit. I wrote a play a few years ago and he loved that. He demanded that I write more. He said, ‘You are all right as an actress but you are better as a writer’.’ Maybe he was offended by the earthiness of some of the roles offered his daughter? ‘No, the ruder the better. He was quite a filthy sod, basically. But he didn’t watch Mr Wroe’s Virgins. He couldn’t handle it. He thought that a bit too rough. He’d say, sorry, The Golden Girls was on at the same time.’

It is a pity Mr Burke missed Mr Wroe for it was as the desperate Martha that she won the Royal Television Society’s Best Actress Award, recognition all the sweeter for Burke’s suspicion that the director, Danny Boyle, thought she was wrong for the part. ‘And when I got the award,’ she says, ‘I didn’t hear jack shit from him.’

So this is the way Burke talks, as well as the way she writes letters for publication. You could call it unsophisticated. She blames the roles she has taken, ‘people with learning difficulties and turn-of-the-century simpletons’ for ‘keeping her back’, making her naive and childlike in real life. To an interviewer’s ear, it sounds like a state of grace.

Joanna Lumley? ‘I get so girly in her presence I wonder: ‘Do I fancy her or something?’ Children of her own? ‘Not with the bloke hanging about at the moment.’ Past boyfriends? ‘I had me heart broken a few years ago, but he was a nut. Bloody actors. We got rid of each other. It was a case of having to, otherwise we would’ve ended up dead. We’d have killed each other.’ With a new 10-minute piece she has written for cinema awaiting the go-ahead next week, and Harry Enfield and Chums and Common as Muck starting this, January could signal a big year for Burke, perhaps the year everyone realises she is actually a rather better actress than Bonham Carter.

But, however good it gets, she says it will not shift her from her little home, half a mile from where she grew up. This, she says, using an adjective that surprises me, is where she feels safe. But never mind where she lives. Burke’s integrity is impregnable. 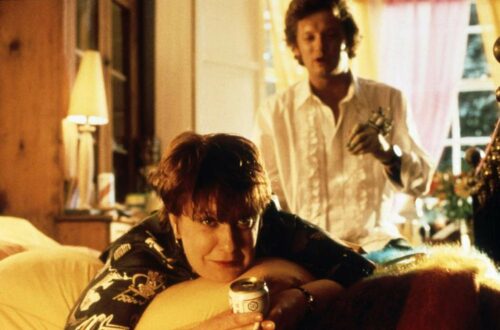 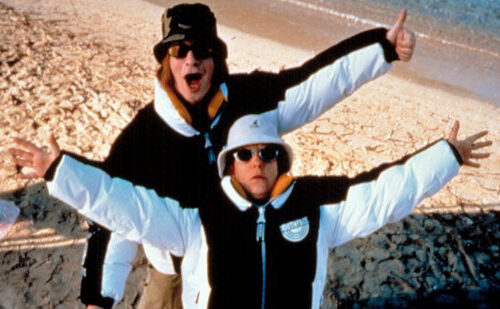 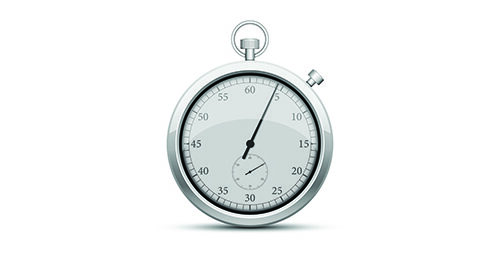